We provide the following services to our response area and beyond:

We have two fire stations located in the southern portion of Wake County, North Carolina, and operates two stations in an unincorporated area bordered by the City of Raleigh to the north, Garner to the east, Apex and Cary to the west and Holly Springs and Fuquay-Varina to the south.

Facebook timeline
Twitter timeline
NCWakeFRFD
News headlines
An article about our new recruits:
https://www.wral.com/paid-training-raises-recruiting-pay-off-in-record-number-of-new-wake-firefighters/20554294/
Are You Interested in Becoming A Career Firefighter in Wake County?
The Fairview Fire Department is excited to participate in this career opportunity to partner with Wake County Fire Rescue Services and Wake Technical Community College. Please use the link below to apply.
Read more »
Santa visits the fire house 12/17 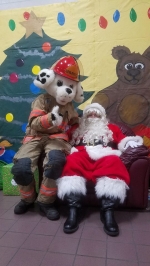 UPDATED: Santa and his reindeer aren't afraid of a little snow, but he wants the kids to be safe. He has postponed his visit one week to Monday, 12/17/2018 from 7:00-9:00 PM.Come join us with your family as Santa makes his annual visit to Fairview Fire Station #1.
Read more »
Notice to the Citizens of the Fairview (Ten-Ten) Fire District
For over 55 years, the Fairview Fire Department has been there to help our community in their time of need. Today, Fairview needs your help.The Fairview Fire Department has learned that the Director of Wake County Fire Services, Nick Campasano, plans to use fire tax dollars collected in the Fairview...
Read more »
Announcements

Our History
Established in 1963 as the Ten Ten Fire Department of Fairview Community. Founder Gene Ogburn was also known as the person who brought foam machine to help extinguish 1964 fire in Bryan Building at Cameron Village. Incorporated later as Fairview Rural Fire Department, Inc.
In 1963, the first fire station (a two-bay brick building) was constructed at 4501 Ten Ten Road) on land provided by Fairview Community Center. The first fire truck was an early 1950's weapons carrier purchased from federal surplus. Placed in service as Engine #1, the unit was modified by Marvin Powell, Gerald Atkins Sr., and Craven Langston at William Powell's. Two Ford taillights were mounted on the hood as emergency lights. Paint was donated by Sander's Motor Company and Wade Cummings painted the apparatus in a chicken house. K&L built the 450 gallon tank. The pump was 80 GPM, petroleum-fueled.
Throughout the years, firefighters funded, and often built, several their own fire trucks using apparatus from State surplus and other sources.
In 1982, Fairview became first rural fire department in Wake County to offer EMS First Responder service. The first call was answered the following Wednesday night for a two-car accident at the intersection of Ten Ten and Holly Springs roads. The department was chosen by Wake County as part of a pilot program due to its location between four rescue districts (Apex, Cary, Fuquay-Varina, and Garner). Members completed a 45-hour course that certified them as "first responders" who could respond to health-related emergencies, and render aid until emergency medical technicians arrive.
In 1990, a second fire station was completed at 7401 Ten Ten Road.
In 2000, members founded and incorporated the North Carolina Fallen Firefighters Foundation, a non-profit organization to support families of firefighters killed in the line of duty.
Today, after more than 50 years, Fairview firefighters continue the tradition of service to the community with a combined career and volunteer officers and staff. Fairview operates at an EMT level for medical response, and most personnel hold various State and National fire and medical certifications.
Excerpts courtesy Mike Legeros, https://legeros.com/ralwake/wake/history/fairview.shtml
See Fairview in Action

This site has been viewed 402,141 times.
News
Events
Pictures
Apparatus
Maintained by the members and staff of Fairview Rural Fire Department. Designated trademarks and brands are the property of their respective owners. Copyright © 2006-2023. YourFirstDue Inc. All Rights Reserved. Content on this web site is supplied by Fairview Rural Fire Department. YourFirstDue Inc. cannot be held responsible or liable for any content, text, pictures, or any other media found on this web site.
Management login
Powered by